What seemed like emerging from the grips of the pandemic in 2020 was really a case of managing working in a COVID-19 affected environment. The project was seriously affected in 2020 in that the Living with Lions project was not permitting mountain lion trapping, resulting in several lions “falling off the radar”.

This year has, on the other hand, been the most productive year of the project since its inception in 2016. It was the first time we got to tracking more than 10 lions at the same time. On the downside, we also had the most collared animals die during one calendar year, affecting our overall sample size and losing the opportunity to track these fascinating animals for longer. 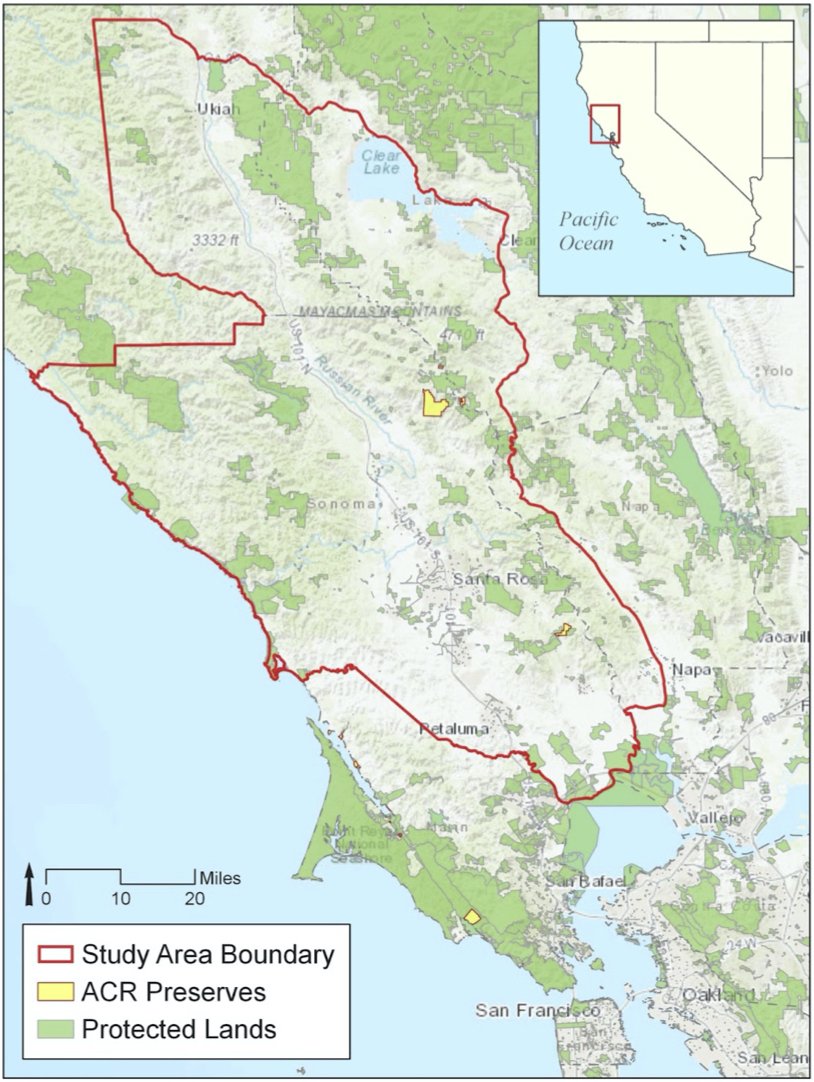 The following are the lions and their histories that we have managed to track using GPS tracking collars during the course of 2021.

P1 was captured and collared on the 6th October 2016 on Bouverie Preserve - the first puma collared by the Living with Lions team. She is still alive and is estimated to be about 15yrs old - quite old for a wild mountain lion. She also has a very calm demeanor whenever we have come across her. The following poster tells more of her story. 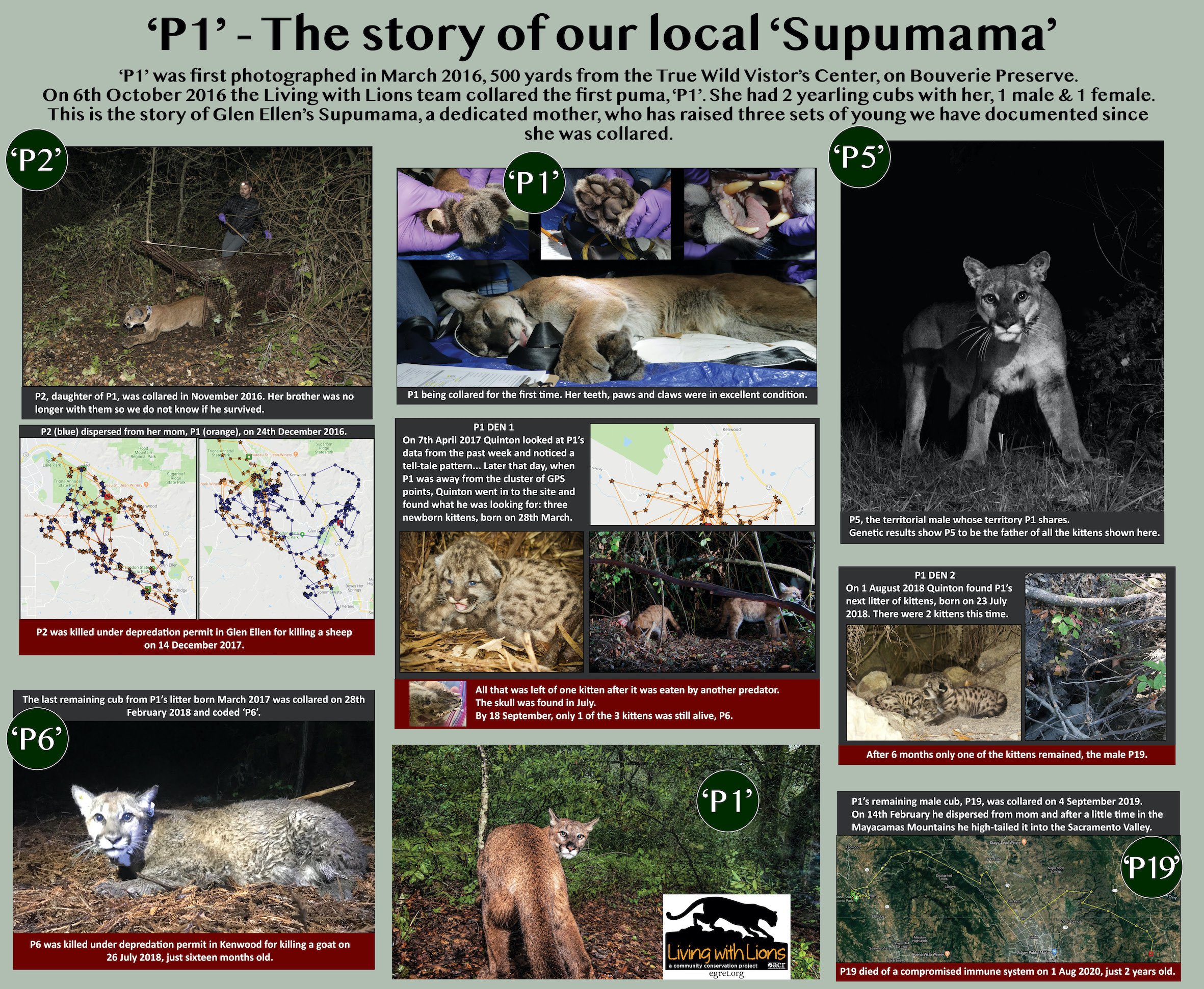 First collared in February 2017, P4 was tracked as having her range mostly in Napa from Arrowhead Mountain south of Sonoma, to the Oakville Grade 10 miles to the north. Her first collar dropped off prematurely after only about 5 months of tracking, however, we were able to recapture her and keep her monitored for the past few years. 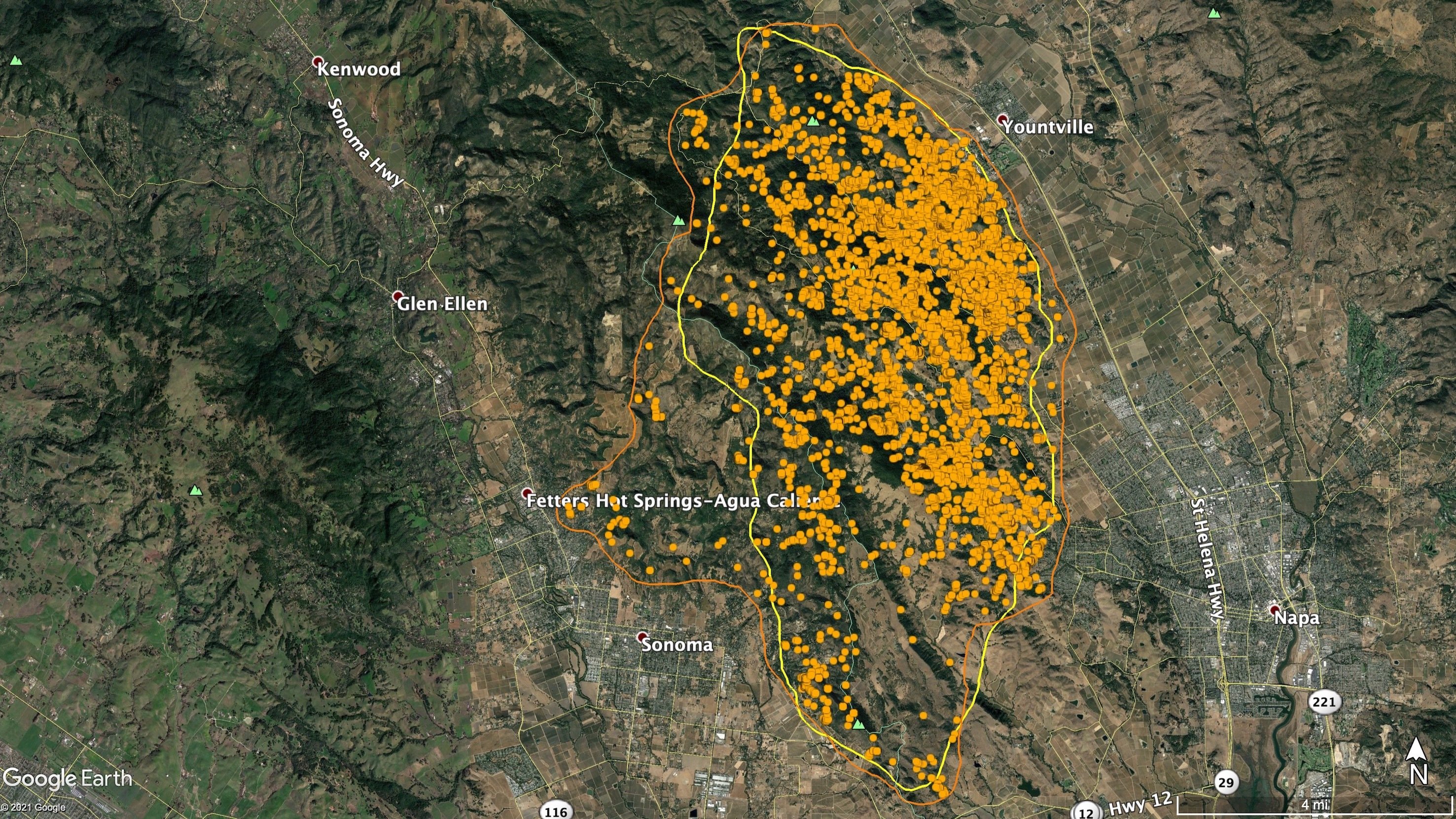 We have documented P4 having several litters of kittens but have not been able to capture or track any of the ones that might have survived to disperse from her. The last litter of 2 kittens she had were born on the 16th February and discovered by Quinton on the 3rd March 2021.

P4 kittens born on the 16th February in Napa On the 7th November 2021, we were able to recapture P13 on Taylor Mountain Regional Park to replace his faulty $3,000 GPS collar.  We captured him in one of Quinton & Neil’s unique electronic cages that does not require bait. The walkthrough trap had worked perfectly, and we encountered him being quite calm in the trap, playing with one of the soft, wooden bite sticks left in the cage to keep the lions occupied in lieu of bait. We were able to replace his collar and send the faulty one back to Germany to be repaired or replaced.

P13 has been collared since the 13th December 2018 beginning as a young adult male without a fixed territory, to the main territorial male in the area west of HWY12 and south of Santa Rosa, having managed to oust P5. P13 movement once he had established his territory 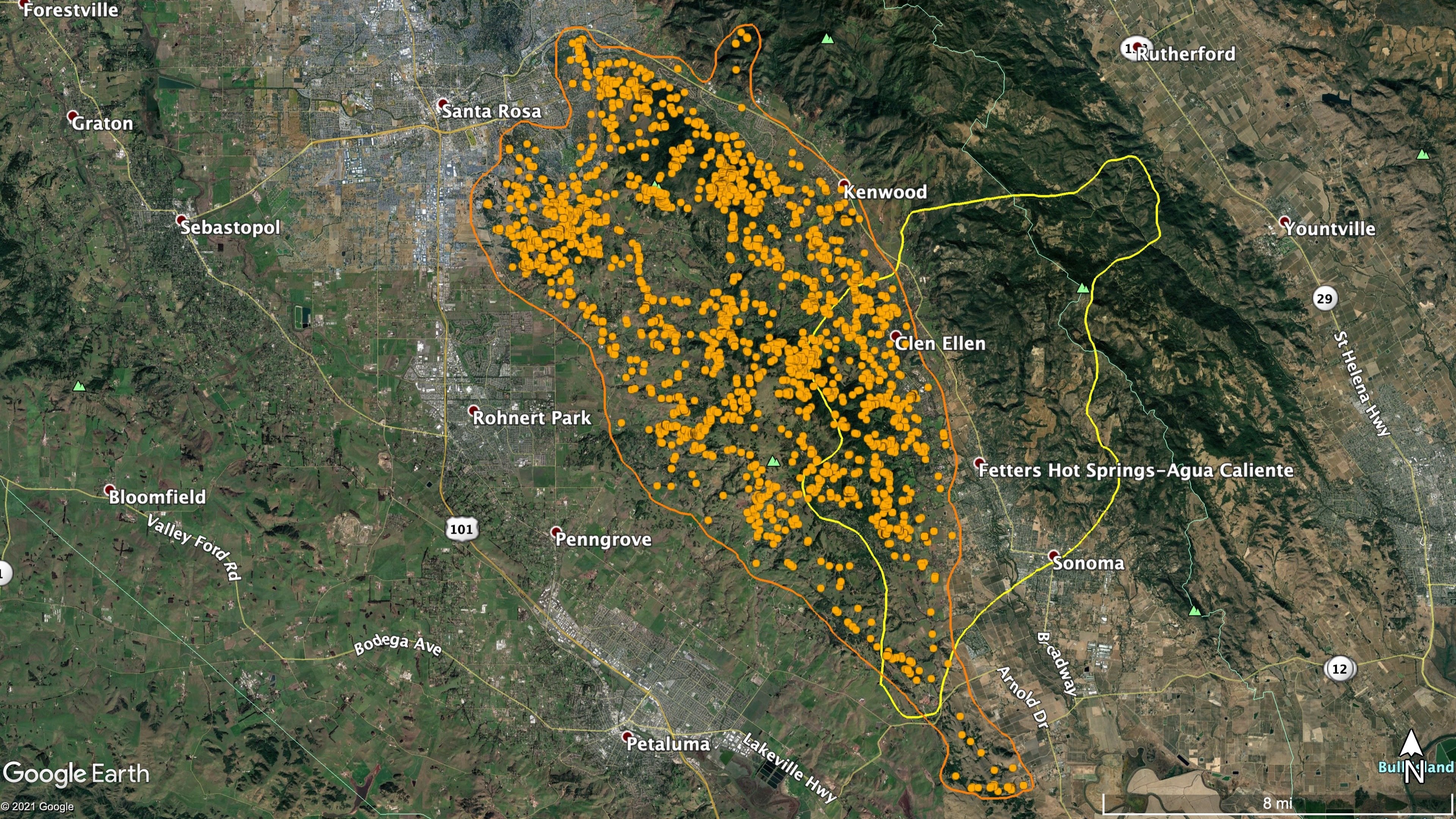 In May 2019 we had an opportunity to capture and collar a lion that had been feeding on a deer on a private property just north of Sonoma. It turned out to be a young adult female who had showed no signs of breeding yet. Her lion research ID was P16 and the landowners decided to call her Luna. Since then Luna established a territory of her own and started to breed.

On the 14th February 2020 she had a litter of two cubs in the Kenwood area. Quinton was able to monitor these two kittens from when they were a week old. It was astonishing to see that the mom did not hide the kittens very well, and for the duration of the denning period, stayed in one relatively exposed area. 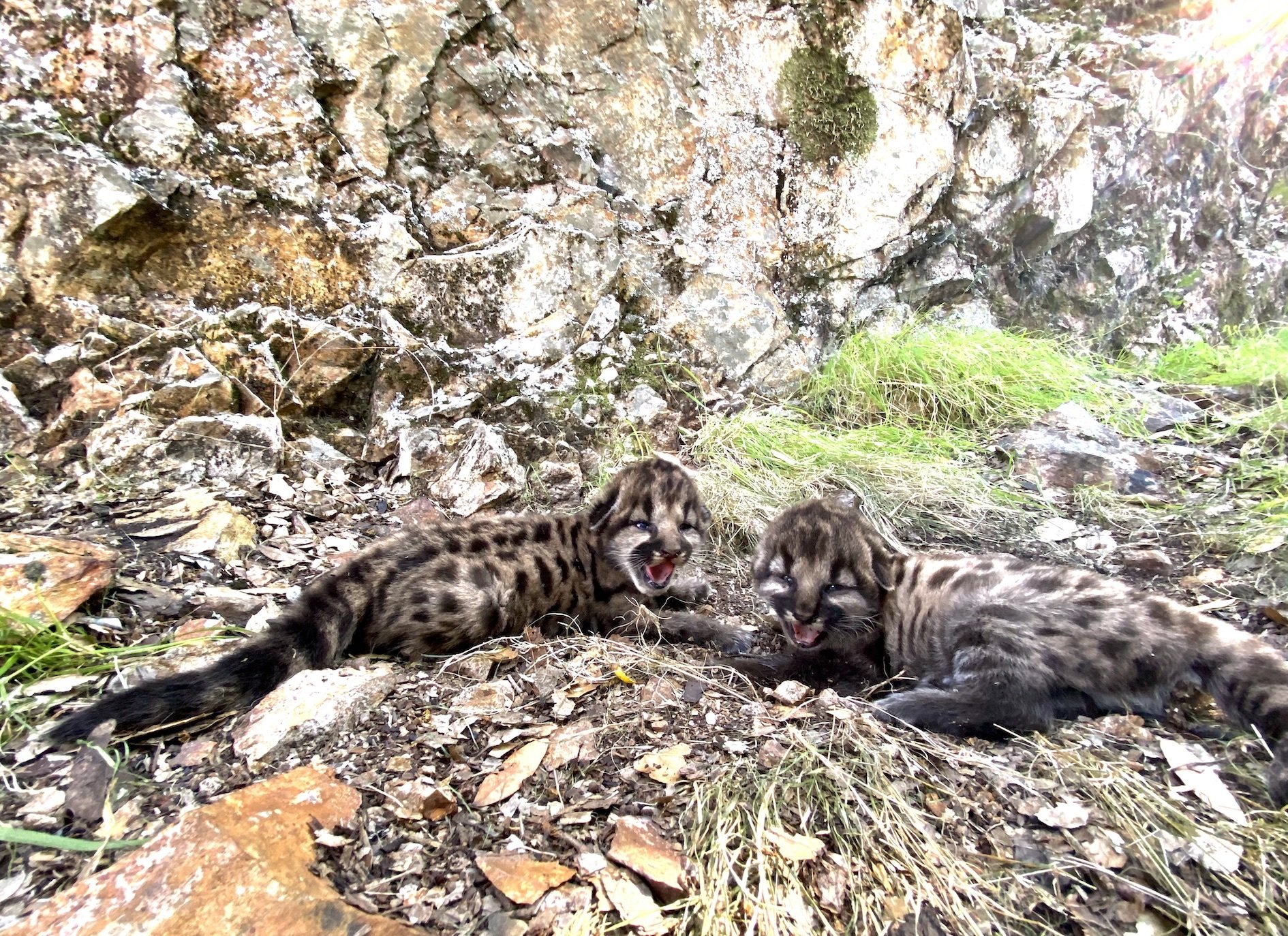 At the 2 month mark, Luna had the kittens begin to follow her, and a week later, the male P5 came into the area - venturing into part of the territory that he had previously lost to another male. He killed and ate both kittens, as he would have known they were not his. Cases of infanticide like this induce estrous in the female and it was just over a week later that P5 met up with P16 again and mated with her - the result, a single kitten P27 (Stella).

For people, this scenario can be shocking. For territorial animals like this it is standard practice. It is also the reason why we do not recommend relocating adult territorial predators like mountain lions (which is sometimes a well-meaning suggestion as a means of dealing with a conflict situation). The result can have a devastating effect on the social system that the mountain lion is relocated into - he would fight with the territorial male, potentially killing him. Then he would kill any cubs in the area. With an average of three females in each male’s territory, that could be about 9 cubs. P16's story continues below with her daughter, P27.

Stella was the only kitten of Luna’s (P16) second litter. P5 was the father of P27 born on the 6th August 2020. This time Luna managed to keep her safe through the early months.

P27 as a 13 day old kitten, secreted away in the bowl of a burned madrone 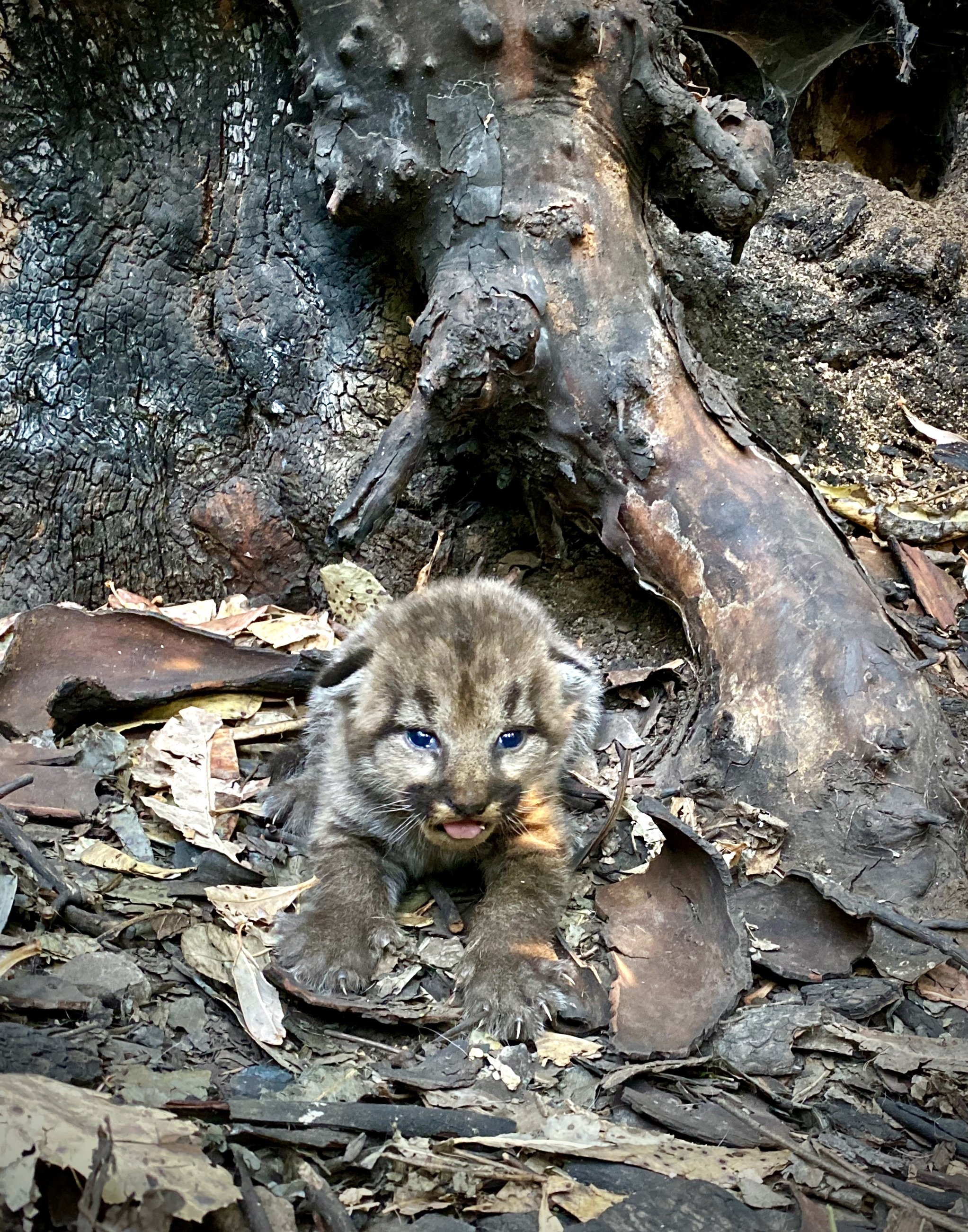 In March 2021, we were trying to capture Luna to replace her collar when her daughter went into the trap. We ear-tagged her P27 and she was named Stella. Later in the year when she was old enough (1yr) we recaptured her to place a collar on her to track her movements when she was ready to leave her mom and disperse. Unfortunately in October she died, along with her mother, P16, three weeks later.  The causes are still unknown, potentially a communicable disease. A necropsy was performed and we are expecting results in early 2022.

Mountain lion P26, known as Wobbly to us, was a fascinating mountain lion to watch over the past 5 years. We first caught sight of her on a trail camera as a roughly 6-month old kitten in May 2017 and immediately noticed her stilted gait. She seemed to have some kind of congenital neurological disorder that impacted her gross motor movement. She continued to be seen by nearby residents on critter cams over the years and was finally collared in March of 2021 in Penngrove.

We were impressed by her ability to feed herself and survive given her condition, even killing fully grown deer. However, we noticed some unusual patterns in the way she moved through her home territory: she would often use only the edges, the margins, dipping into drainages and creeks on the edges of human habitat and perhaps avoiding other more dominant lions, which is behavior we typically expect of juvenile cats. To our surprise, she mated with a territorial male P13 and delivered two kittens on June 27. She abandoned them, however, within a day or so, presumably not able to take care of them. 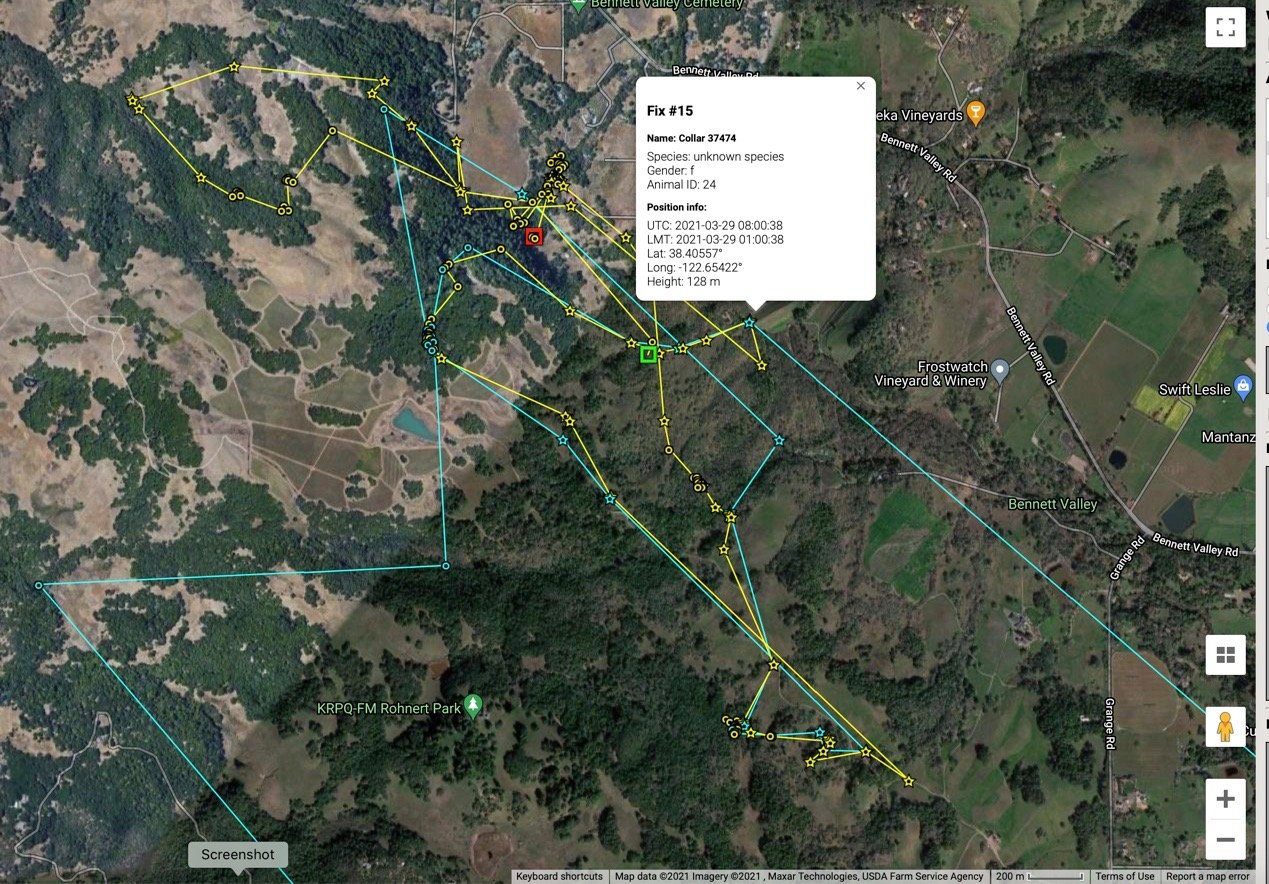 For the next month after that she spent all her time in a small creek bed running down towards Costco in Santa Rosa. When a resident called to say her cat had disappeared and she had seen a mountain lion Quinton and Jake tracked P26 with the radio telemetry and caught a glimpse of her peering at them through the brambles.

P26 keeping an eye on Quinton from the cover of brambles On 18th October Wobbly was spotted in a dry creek bed near the Evergreen Elementary School in Rohnert Park causing local schools to lock down for a few hours.  Within an hour a varied group was called in to assess and diffuse the situation—from the Rohnert Park police to True Wild’s Quinton Martins, California Department of Fish & Wildlife (CDFW) personnel, veterinarian Graham Crawford, and Doris Duncan from Sonoma County Wildlife Rescue (SCWR). Once it was established that P26 was unresponsive and staying out in the open, contrary to normal mountain lion behavior, she was darted and taken to SCWR for observation.

P26 crouched in the open in a dry creek bed 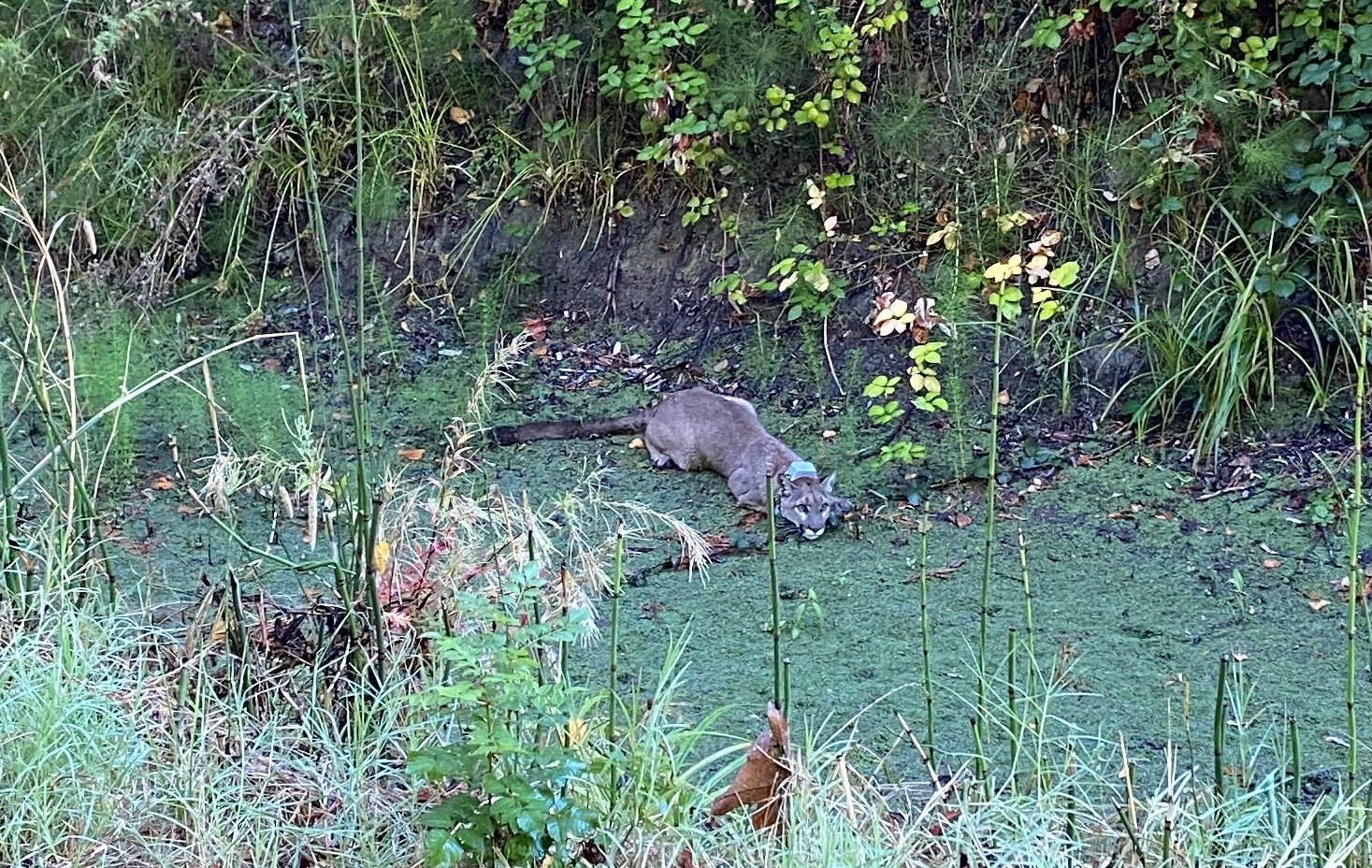 She had lost a lot of weight and though there were no obvious injuries she was clearly unwell. She was taken to the VCA Animal Care Center in Rohnert Park where she underwent multiple tests and scans, including an MRI, to see if they could determine what was wrong. There was nothing conclusive but she was clearly in a very bad state. Due to her history of having what appears to have been a severe congenital neurological disorder, combined by her rapid deterioration in body condition and overall health, CDFW in consultation with various relevant experts, decided to euthanize her on the 22nd October. 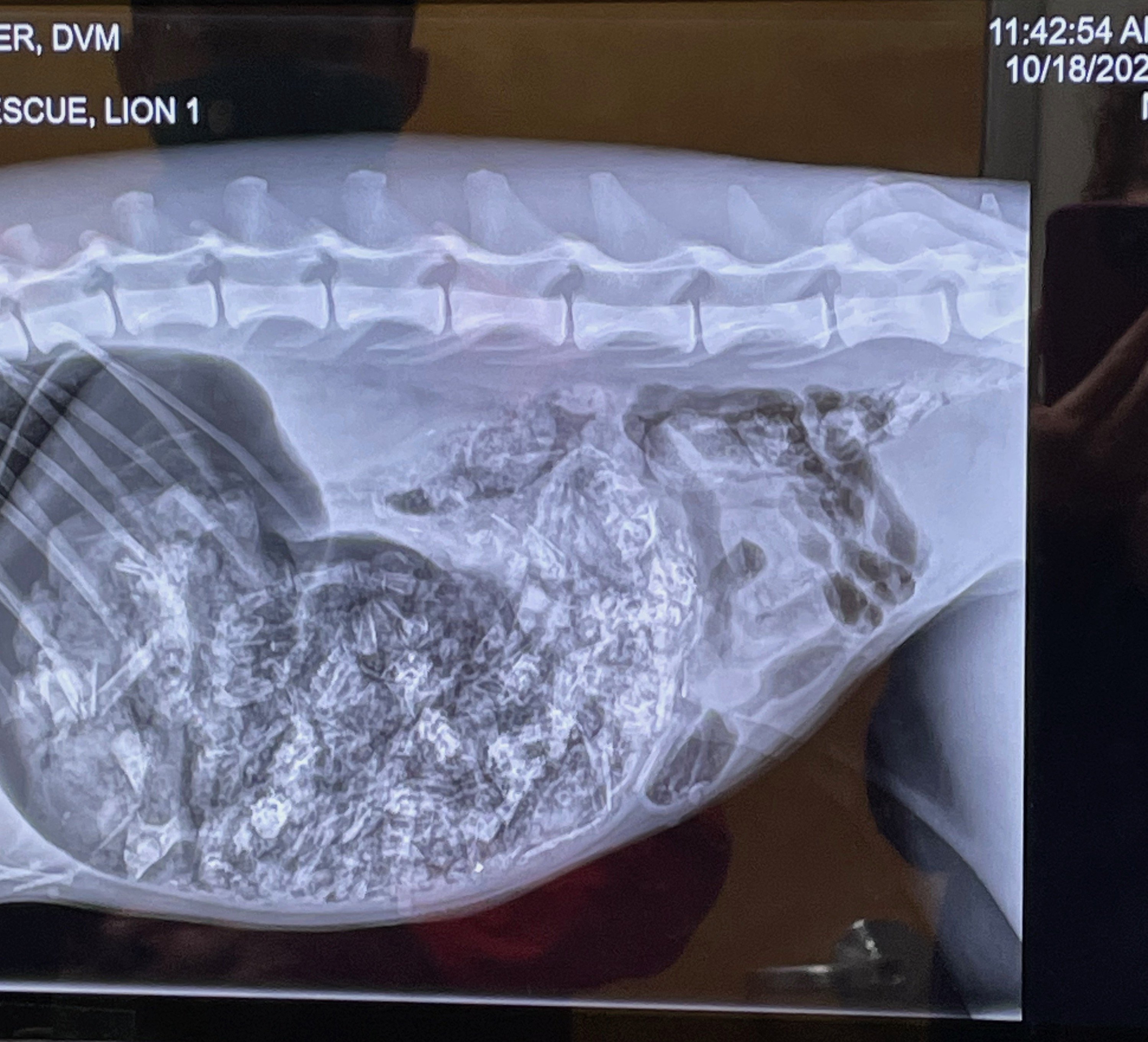 P24 was collared near Healdsburg and his data indicated that he was the territorial male despite being fairly young. He seemed, unusually, to favor livestock over deer, and this led to his early demise when he was killed in December during a livestock depredation incident. 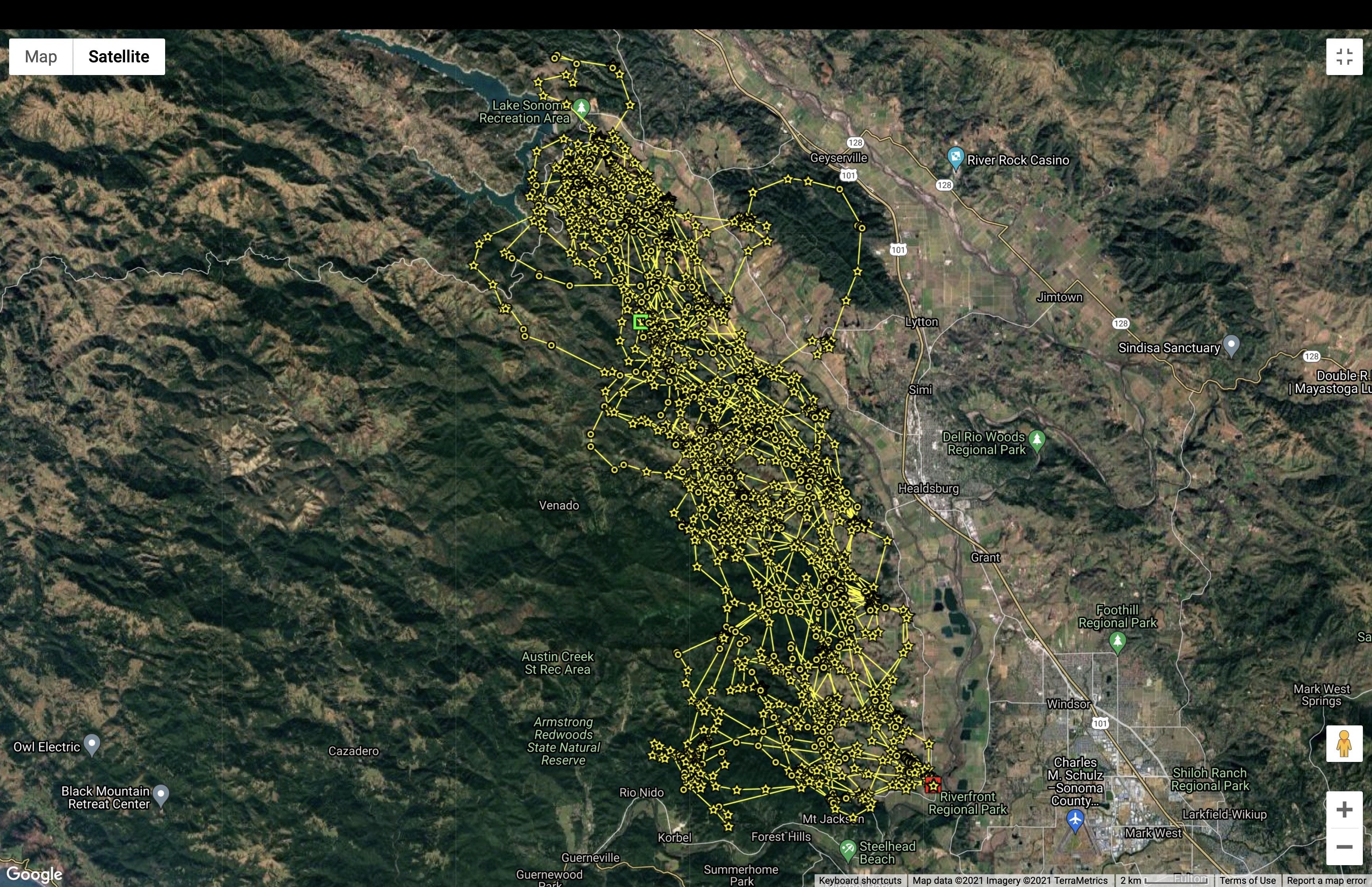 P25 is the territorial male using Cazadero and north of there. He has access to wild boar which he seems to enjoy as part of his diet. 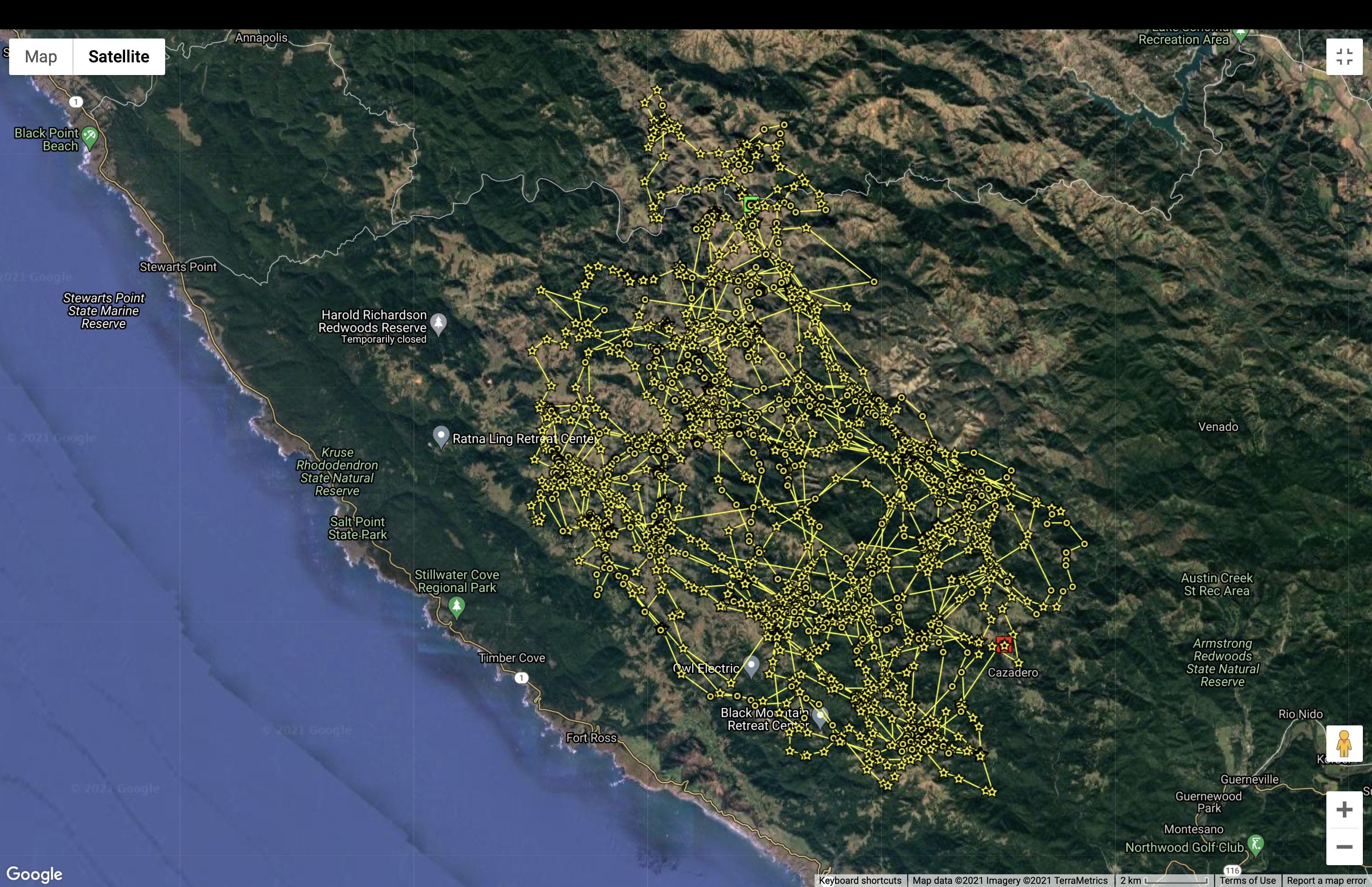 We were alerted by a landowner near Geyserville that their goat had been killed by what seemed to be a mountain lion. Immediately we set out to investigate and found that the kill had been made by a lion. A trap was set and that same evening we captured a young adult male, P30.

P30's paw - young feet, pads not yet cracked with wear and tear 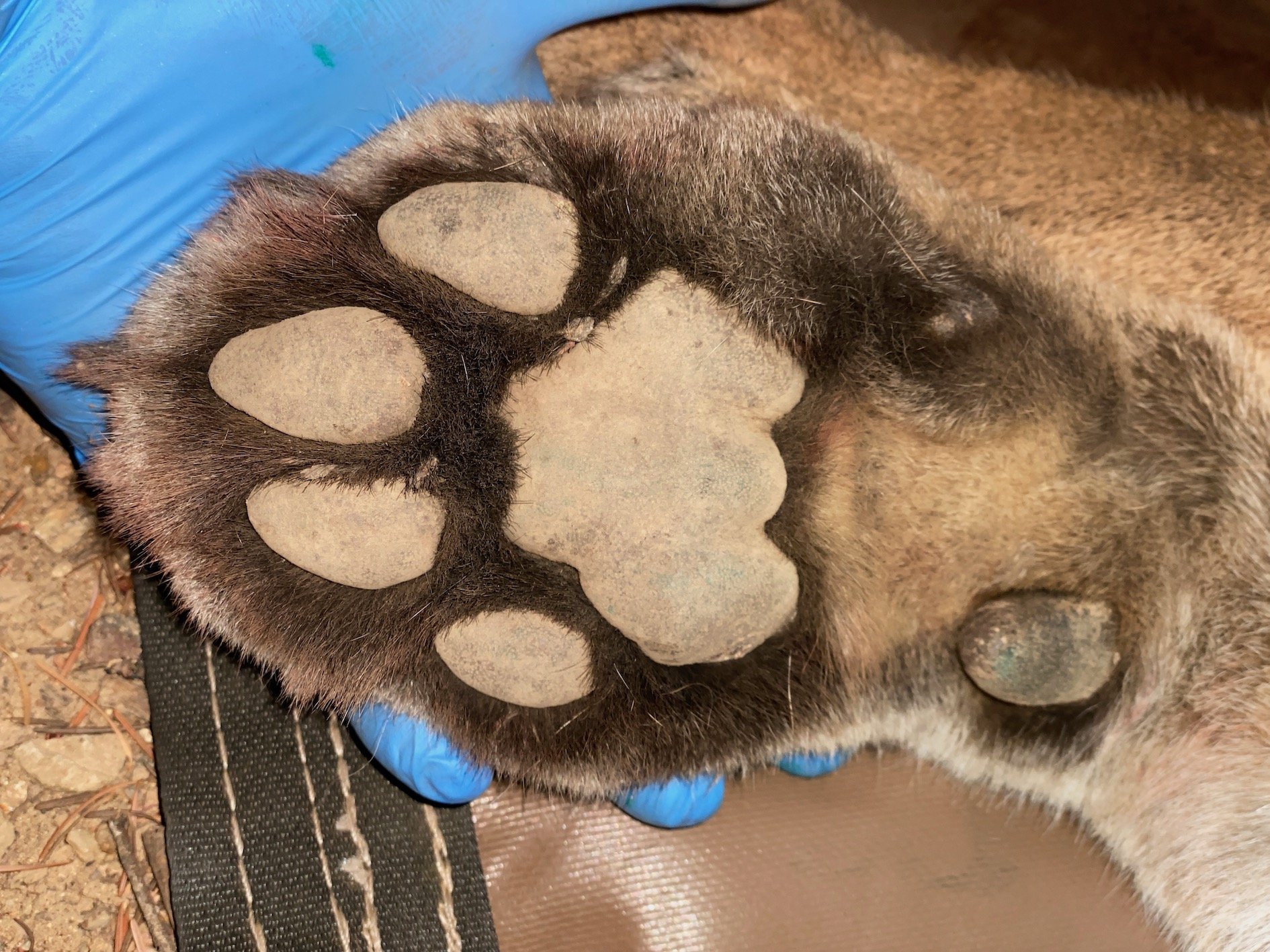 P30's movements overlapped somewhat with P24's territory, but it is unlikely that he posed any kind of threat to P24 who was older and the dominant male in the area. Now that P24 is dead, it will be interesting to see if P30 takes over part or all of P24’s range. The landowners were encouraged to find a way of adequately protecting their other livestock as they live in good mountain lion habitat, and the possibility of another attack by the same or another lion will always be there unless the animals are protected. As with P30, we were called to help with a lion depredation event near Sebastopol where a large ram was killed along the edge of a creek. This case was more unusual for us as it was a commercial farmer with a medium-sized flock of sheep. Most losses we encounter are with landowners who have fewer than a dozen small stock. We set a trap and caught P31, a fully mature, ~130lb male lion of about 8yrs old. The nearby creek was a perfect corridor for him to use and the 7ft fencing around the sheep paddock could not keep a lion out (they can jump 15 feet high!).

Since collaring him, we have seen that P31 frequently crosses the Russian River. This surprised us as we anticipated a river of that size to be a natural boundary between two territories.